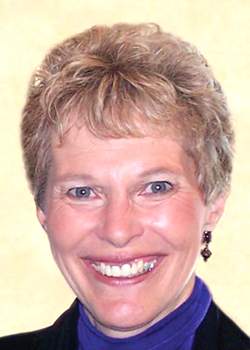 JoEllen Koerner has enjoyed a lifelong nursing career, practicing in diverse settings from a rural 10 bed hospital in South Dakota to a computer-based ‘Primary Care Clinic in the Cloud’ that reaches from Africa to Switzerland to the Reservations of the Great Plains. A third-generation descendent of Mennonites migrating from Russia to homestead in America where the railroad ended - the Dakota Plains - her family would have perished their first winter without the support of the generous Lakota Sioux Nation. The bond of respect and friendship between these two cultures has spanned generations, giving rich depth of understanding to her world view and meaning to her lifework.

Born in 1946 at Sioux Valley Hospital in Sioux Falls, SD, JoEllen grew up in the small town of Freeman (population 1000) where she spoke only German until learning English in Grade School. Her love of nursing began when, at age 5, she made daily trips for cat care to the home of 93-year-old neighbor Mrs. Brown. Jo noticed that as she fed the cat and asked questions of Mrs. Brown, the elderly woman would shift from a quiet and withdrawn stance to become an animated and energetic storyteller. Cloudy eyes would sharpen, delight would fill her face - a caring presence is the catalyst that quickens another’s life force - the primary source of healing.

After high school graduation, JoEllen attended Sioux Valley Hospital School of Nursing, taking her first position there. She quickly discovered a major key to an exciting and ever-evolving professional career - simply tap into the birthright gifts we all are born with - curiosity, wonder and creativity. She never applied for a job, rather, she was always invited to the next one by simply being open to what was in front of her - and willing to take a risk because she knew that others much wiser would be there to show the way.

JoEllen was appointed by USD School of Medicine to the health team that established telemetry-based cardiac care in SD. After extensive technology-enhanced training, 20 monitored cardiac beds were opened at SVH. The group then trained coronary care teams in small and mid-sized rural hospitals throughout the state. Twenty years later, one of those rural coronary units saved her father’s life.

JoEllen returned to the farm and raised twin children with her husband, Dennis. During that time she worked in a rural medical clinic, providing primary care to families in the region. As the children grew, she turned to nursing education, serving as Nursing Chair at Freeman Jr College. She then became Executive Secretary of the SD Board of Nursing. Working closely with the SD Medical Board and SDSU Graduate Nursing Program, legislation was passed to provide licensure for Advanced Practice Nurses. At a time of physician shortage coupled with an aging population facing increasing chronic care needs, the presence of APN providers greatly enhanced primary care provision throughout the state.

SVH brought JoEllen back as VP for Patient Services. She was charged with designing and delivering patient care in an increasingly complex environment of advancing technology, changing roles of MDs and RNs, increasing chronic and acute illness statewide, and decreasing federal/insurance funding for care. To manage these complexities with quality in a cost-efficient manner, a unique care delivery model was designed. Patient Centered Care Units were established to include the patient and family as active members of the care team. Collaborative Care Teams, Home Health and Case Management was initiated to bring complex and chronic patients back to rural communities rather than spending months in a hospital bed. Clinical and cost outcomes were exceptional, attracting much national attention. A Healthcare Study Abroad Exchange from Beijing China explored rural health care at SVH. Ideas for care were taken back to China, and a Professional Partnership Program was designed to help with ongoing skill building and administrative programming.

In 2013 JoEllen joined a five-member interdisciplinary team at CareSpan to design and develop a ‘virtual clinic in the cloud’ to serve remote and underserved rural communities and SD reservations. The Great Plains Regional Tribal Chairman’s Council, a consortium of 18 reservations in SD, ND, Nebraska and Iowa, serving 415,000 people, now has access to care. JoEllen worked with SDSU College of Nursing to train a new generation of APNs in digital health care delivery, helping address shortages of primary health-care providers in remote parts of the globe.

Throughout her career, JoEllen made a significant contribution to the advancement of nursing scholarship as the author of 4 books, including Healing Presence: The Essence of Nursing; Mother Healing Myself: An Intergenerational Healing Journey Between Two Worlds; Death by Completion: A Guide to Conscious Dying; My Life My Canvas: My Way; and 26 professional book chapters and 90 articles focused on nursing science and ethical leadership development. She was invited to the White House to represent SD nurses during the Bush Administration. Elected President of the American Organization of Nurse Executives, she was the third recipient of the AONE Lifetime Achievement Award based on the SVH Patient Care Delivery Model and exemplary clinical outcomes obtained. In 2016, JoEllen was inducted into the South Dakota Hall of Fame. This award celebrates all who offer daily deeds of service to improve quality of life - the ultimate act of excellence!